What Are Colonial-Style Windows? 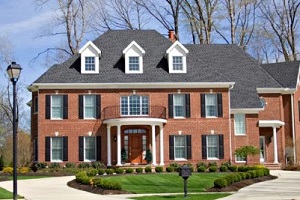 The Colonial home is a very popular style of home in the U.S. that has stood the test of time. First emerging during the Colonial period in the 1600s to the mid-1700s, this English-inspired style was very popular in New England as well as the Southern U.S. After falling out of fashion around the time of the American Revolution, it experienced a strong revival that still lasts to this day.

There are a few things that set Colonial homes apart. They are typically salt-box-style homes with two or three stories that feature symmetrical architecture; steep, side-gabled roofs; a front door in the center of the home with a window above it; and decorative shutters.

One of its most defining characteristics, however, is its windows. Colonial homes do not stick with any single specific style of window. Instead, windows are considered to be Colonial style based more on their arrangement and other features.

Double-hung windows are one of the most popular choices for Colonial homes as they have the most traditional appearance. It may be difficult to tell at first glance whether a window is double-hung or single-hung, but if both the top and bottom sections of the window can be opened, it is a double-hung window. 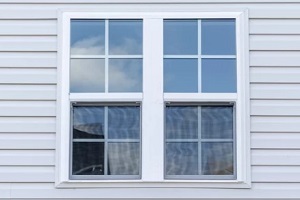 These windows are favored for their enhanced airflow. Being able to open both sashes partway or choosing to open just the top or the bottom gives homeowners many options when it comes to optimizing the circulation of air in the home according to wind direction and other weather conditions.

Opening the bottom sash enables cool air to enter the room while opening the top sash allows warmer air that has risen to the top of the room to escape.

They are also easier to clean than other varieties because they tilt into the home’s interior. Single-hung windows, in contrast, can only tilt in the bottom sash, which means the top sash must be cleaned from outside of the home. This is particularly challenging on upper floors and can also add to your expense when using the services of professional cleaning companies.

They have a very similar exterior appearance and are nearly indistinguishable from passersby, especially when they are closed. They offer a timeless style and are very energy-efficient. 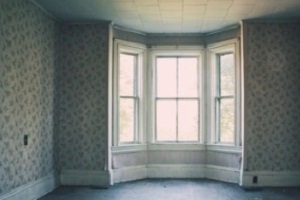 Another popular window choice for Colonial homes is the bay window. Bay windows are usually made up of a center picture window that does not open but allows a considerable amount of light to flood into the home. It is flanked by double-hung or casement windows on either side in keeping with the symmetrical appearance that is the hallmark of Colonial-style homes.

The three windows that make up a bay window are joined at an angle and extend past the exterior wall for a very elegant architectural element that adds charm and plenty of light.

Because these windows do add a small amount of extra square footage to the home, some homeowners choose to make the most of the extra space by building seats or benches into the nook to provide a cozy place to sit and enjoy the view.

Regardless of the type of window you choose for your Colonial-style home, you will likely want to incorporate grids for a traditional appearance. Standard grids emphasize the symmetry of this style and make the home appear geometrically proportional.

Some of the grid patterns that are commonly chosen for this style of home are 6 over 6, 9 over 9, and 12 over 12; the grid pattern on double-hung windows will usually be the same on both sashes. 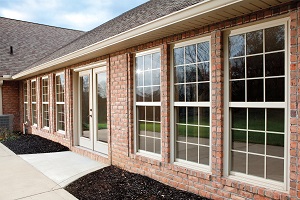 These grids once served a chiefly functional purpose, holding multi-paned windows together, so they could be shipped more easily without fear of breakage. Modern window grids, which are sometimes referred to as muntins or grilles, are mostly decorative.

They are often placed between the glass to make it easier to clean and provide a smoother surface, but it is still possible to order windows that have the grid placed outside of the glass. Some grids are placed on the side of the glass facing inside the home and can be removed for cleaning.

Reach Out to the Experienced Northern Virginia Window Contractors

Your windows are an important feature of your home from an aesthetic and functional standpoint, so it is important to choose high-quality windows that match your home’s style and are installed professionally to maximize energy efficiency and avoid problems.

Get in touch with Adelphia Exteriors. to learn more about our window installation and replacement services for your Colonial home in the Northern Virginia area.