What Are The Best Windows For Colonial Style Homes? 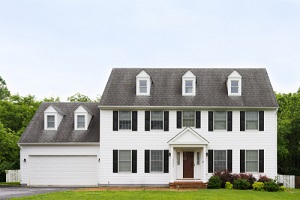 In a country that boasts an impressive range of home styles, it can be difficult for American homeowners to narrow down the architectural style of their homes. However, many homes fall under the broader category of Colonial homes.

This popular style has its roots in the Colonial era, with homes normally featuring two or three stories, wood facades and fireplaces. It is particularly popular in states like Virginia that have a strong Colonial history and abundance of historic homes.

When it comes to updating Colonial homes or building new homes in this style, it is important to get the key aspects of it right. One of the defining characteristics of a Colonial home is a centered front door with windows placed symmetrically on either side.

Although some of the subcategories of Colonial homes may feature different window arrangements, the style of a window in these homes remains important. Here is a look at the best windows to use in Colonial-style homes.

Small panes of glass are a defining characteristic of Colonial-style windows, but modern windows use bigger pieces of glass with decorative grids to get the same look without some of the drawbacks of small-paned windows.

For example, cleaning older Colonial windows can be complicated and tedious, while newer windows are much simpler and faster to clean. In addition, many homeowners like the look of a larger, smooth glass surface with grids placed inside of it. 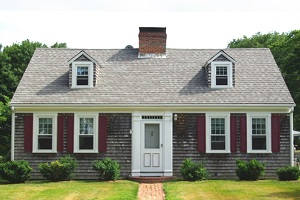 The Northeastern U.S. is full of attractive Cape Cod Colonials featuring gable-front dormers and a minimalist feel. These homes look good with casement windows because they mimic the appearance of classic double-hung windows.

Cottage-style windows are another good choice, with their top and lower sashes coming in varied heights. Many homeowners opt for white or lighter tones for Cape Cod Colonial windows.

The Dutch Colonial style of home was originated by American settlers from the Netherlands in the mid-1600s to mid-1800s. Its most notable feature is a broad, double-pitched roof known as a gambrel roof with narrow windows in the roofline. For these windows, regular or dormer windows can be used.

For the other windows of a Dutch colonial style of home, double-hung varieties are a good choice because of their classic appearance and ease of opening. Because they can be opened simultaneously from the bottom up and top down, air can flow freely through the home to keep utility expenses down. 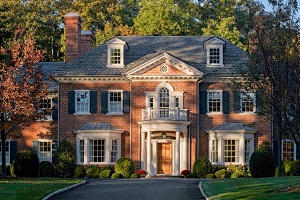 Georgian Colonials were originally built with respect for classical ideals such as the “golden ratio,” a mathematical ratio that can be found in nature and art. Known for balance, symmetry and graceful proportions, Georgian Colonials are square or rectangular and often feature a semi-circular transom window above the front door made of individual planes of glass radiating from a central point.

Spanish Colonials got their style from the Spanish settlers who came to North America, which means they first came to prominence in places like California and Florida. However, their charming stucco walls and clay roof tiles can now be seen throughout the country.

Choose French casement windows that are narrow and tall with horizontal panes instead of vertical ones to accentuate homes of this style. To make it more authentic, be sure to choose a window frame and sash that is the same color as the trim and that contrasts with the stucco on the exterior of the home. 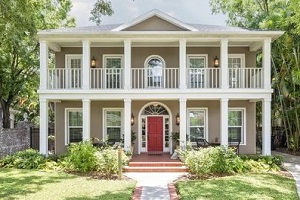 The Colonial Revival style dates back to the late 1800s and combines different aspects of several types of Colonial styles, predominantly Georgian Colonials. They often feature bay windows that are multi-paned and adorned with proportional shutters.

Discuss Your Project With The Northern Virginia Window Contractors

There is no denying the charm and classic elegance of a Colonial home. If you are looking to upgrade the windows in your Colonial home, get in touch with Adelphia Exteriors.

Our team of Northern Virginia